T on Tuesday and Luna's arrived! 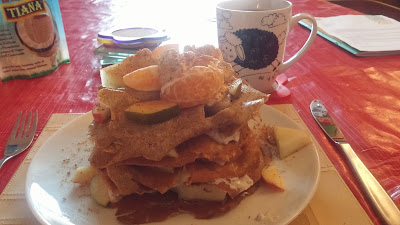 As it is T on Tuesday here is yet another pancake stack this time with fruit tea in my sheep mug! Join in this weekly tradition at Elizabeth and Bleubeard's place! Once again I need to apologise for not returning your comments last week - I intended to do it but I've been a little distracted as you will see.
As you may know from previous posts, 2016 was a horrible year for me. I wish you all a Happy 2017. I still have bad things going on but.......

......Luna has arrived at last and my life will never be the same again! She flew from Cyprus to Amsterdam, was collected by pet courier and driven here via the Eurotunnel train to arrive New Year's Eve early afternoon. Be prepared to be bombarded with Luna photos! 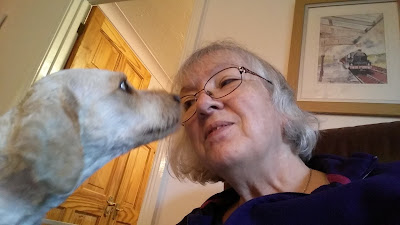 I cried when the man brought her in, got lots of kisses from Luna though. 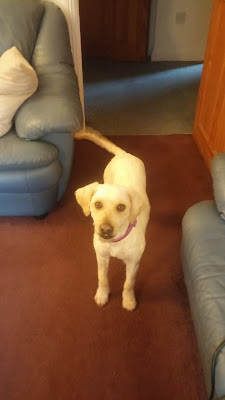 Not only has she left Cyprus they cut off all her curls so she must be feeling the cold. But look at that waggy tail!
She wasn't house trained but after one small "accident" she hasn't had any more and today was actually at the door asking to go out, but then wouldn't do what she had to do until Sooty came out too, and I have to go out every time! That can be very cold, wet and dodgy as the ramp that is there from Alfie's days made by Shaun got very slippery in the frost. 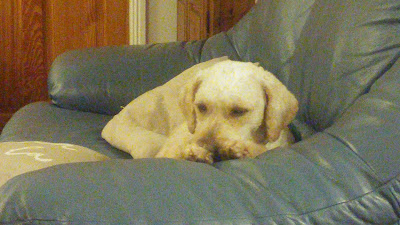 Luna had never seen a TV or lived in a house before. I put the TV on Saturday afternoon and it was still tuned in to CBeebies from my visitors who left just after lunch and before Luna arrived. The programme was about a little girl who had 3 husky dogs, Luna was fascinated.
Later there were fireworks so I had to sit up cuddling two terrified dogs until 1am and channel hopping to avoid fireworks on TV.
Sunday we went for a very wet and cold walk, came home and put the fire on and heating and TV, sat dozing cuddling Luna and it was Countryfile with dogs and sheep and lambs. That seemed OK but next it was Planet Earth 2 and Luna was growling at the animals, first a Jaguar, then Iguana's being chased by snakes. I went to cook my dinner and suddenly heard loads of growling and Luna backed rapidly into the kitchen, when I looked it was the monkeys in India she didn't like!
In this photo she is watching Monster's University and wasn't sure what to make of the monsters! 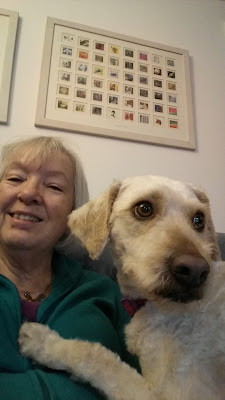 Selfie with Luna. She jumps up and clings on a lot, she likes to greet other people like it but they don't all want muddy clothes! Found out on day three she is scared of men. She loves everyone else and other dogs and thinks they all want Luna cuddles and muddy paw prints all over lol.
She spent her first night sleeping on top of me with her head nestled in my neck, second night she curled up besides me. Saturday night I had to fight two dogs for the duvet which is a single one on a king size bed. Last night I put the other one back on and Sooty was happy. 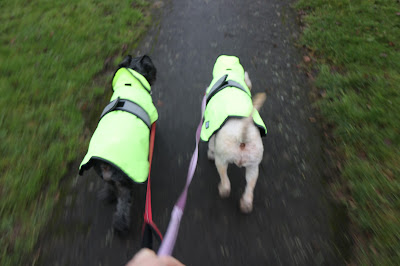 When I first saw the three photos of Luna I thought she was about the same size as Sooty and bought a coat in that size but she is bigger so it's about 2 inches too short and I've ordered a bigger one. I couldn't let her go walkies in this cold wet country without a coat so I used it and cannot return it now. 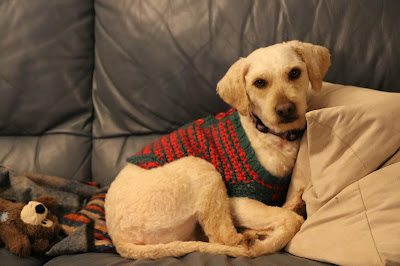 I also made a jumper the same size as Sooty's but left it unfinished as I became suspicious she was bigger after seeing a video of her and I'm nearly done adjusting it. In the meantime she is wearing Alfie's old one that looks like a bolero on her. 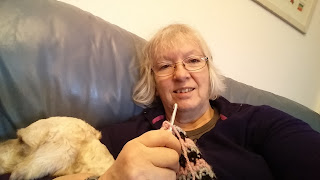 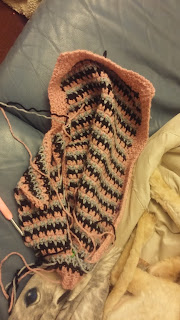 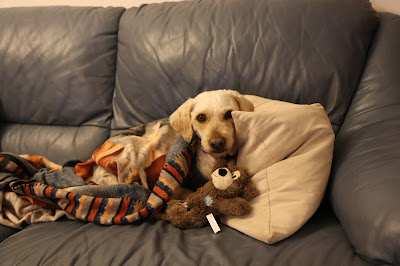 Luna with one of her new toys. She ignored them on day one but on day two she started to play and even stole 3 balls of yarn from a bag in the craft room while I was on the phone. 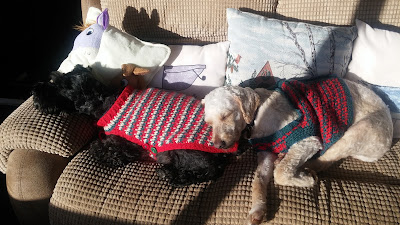 This was after I got up. We were catching some sun on a cold and frosty day. Not sure Sooty stayed put like this for long, he's been sulking a bit since Luna arrived.
I'm finishing this post in bed with Luna laying tight by my side demanding regular cuddles and Sooty snoring next to me.