Confessions of a bad blogger again (T for Tuesday too)! 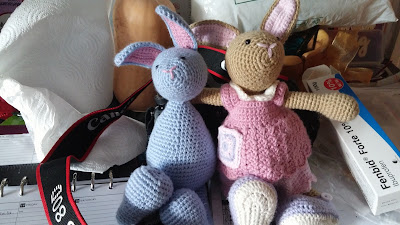 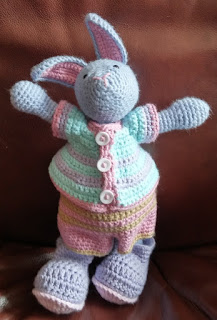 I haven't blogged on here since January I just realised so this could be a loooong post!

I don't think anyone ever "gets over" watching a loved one get sick and die however one has to make the most of the rest of one's life, or give up and die too! I have two small grand children to love and who visit from time to time, can't be moping round weeping all the time.
So I tried to get myself back paper crafting, I bought a new desk unit with lots of storage and I got Quirky Crafts Challenge blog up and running again with new team members, thought it would get me crafting again and using my new unit. Then in Jan my dad was diagnosed with terminal malignant melanoma (skin cancer), the same cancer that killed my husband. The worst part for me was taking him to appointments at the same hospital department with the same medical staff and hearing the same words.
Dad was looking after Mum as she had spinal surgery a year ago and is still not as mobile as she would like to be, then he collapsed and a few weeks later he died. So you can see why blogging has not been my top priority. The ordeal continues as we deal with various matters, and I have had to help Mum get to the bank and other places, as well as helping Mother in Law who had a number of falls. 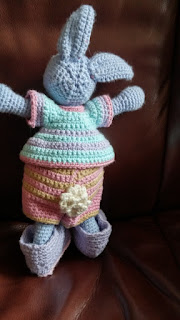 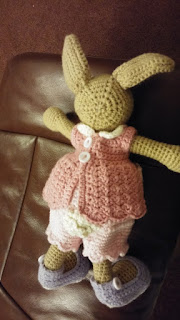 I have continued to crochet when I can, and when I asked my nearly 5 year old grandson if he thought his sister would like this rabbit from an Easter Supplement with Simply Crochet magazine he said "can I have one too?".
I was using up some odd balls of King Cole Cottonsoft for the bunnies, Edward bunny was armless on Easter Sunday, but had arms by the end of the day. Kenny left him here so I could dress him, and I had to improvise as no boy bunny outfit was provided in the patterns. I used the duck's wellies, made the bloomers into shorts with no scalloped edging and used the bodice of the dress then lengthened it and widened it to fit the bunny shape. I just love the little crocheted tails which poke out of the bloomers/shorts!

Girl bunny was renamed Esme, originally Esmeralda which is a mouthful for an 18 month old! 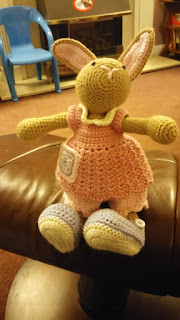 I had started this top before the bunnies, it was a Two Brother's Blanket crochet along and I have done much more but it isn't finished. I stopped to do bunnys and missed the CAL deadline. 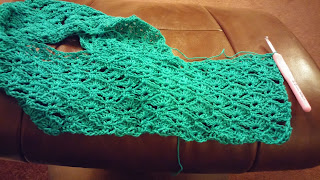 To start the top I stopped the Simply Crochet blanket CAL, better get back and finish it as the next mag must have the joining instructions and I am way behind! 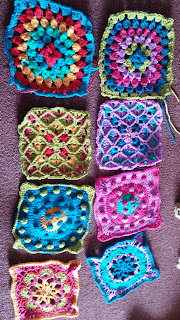 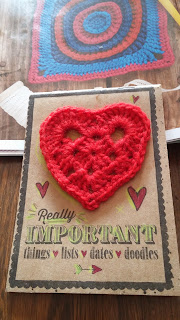 This was a freebie notebook with a heart to crochet with Simply Crochet. 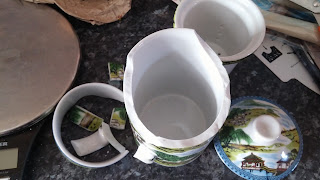 This was a Chinese mug and infuser I bought in an auction to help Cyprus doggies, the infuser and lid arrived in one piece. I was offered a replacement but I declined and said let the dogs have the money. 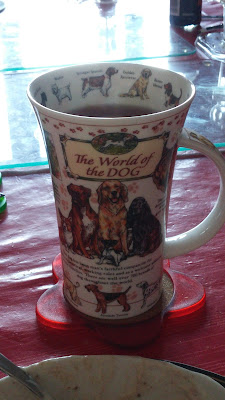 I was really pleased to find this mug on Amazon, I have used very big bone china mugs for a long time - just for me, everyone else uses normal sized ones when they visit! This mug holds 600ml, which is a pint or more, and is nicer quality than the other one I have that I couldn't find anywhere. There are many designs, this dog one is missing Schnauzers in any form, it has dogs inside and all around, info on dogs but that isn't the main reason I bought it. It was the cheapest one at around £15 (the fact I am a dog lover helps). It is full of fruit tea here and so it is perfect for T on Tuesday at Elizabeth and Bleubeard's place. 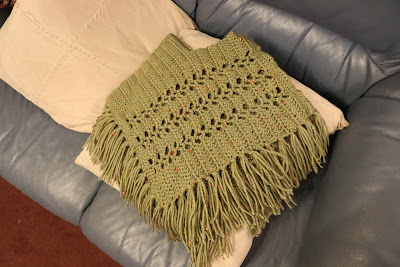 I made a toddler poncho from some patterns I sort of won, but had to pay for. I didn't realise I would have to pay or I might not have entered the draw. I felt I should go ahead once I realised, and I got 200 patterns for £11.99 but they are all babies and toddler patterns so limited use. 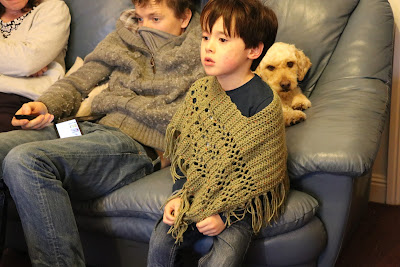 Poncho is huge, well the neck is, here modelled by a nearly 5 year old!

Luna has been here over 4 months now, hard to believe and she has come on so much. Sooty is still scared of her when she plays - she is a bit rough, and he is nearly 13 years old - but I am seeing signs of progress. He likes to get in his den under my computer desk when I am in here, and Luna joined him a few times. If I pushed back my chair to look or snap a photo he shot out of there like a rocket! He wouldn't try and push past her and he wasn't staying there with her, but this week she has been in there first and he has been jostling to push by and get in besides her!
She is still wary to scared of some men, she has got used to most traffic and is perfectly house trained. She likes apples but not pears, and sometimes will eat carrot but not often, she would rather have a chunk of banana. 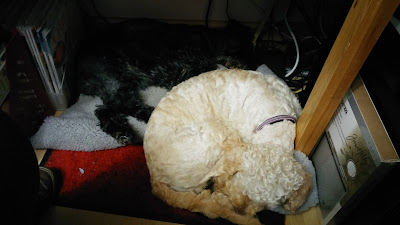 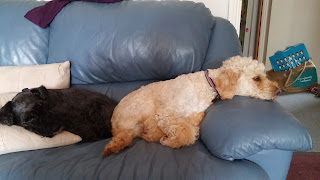 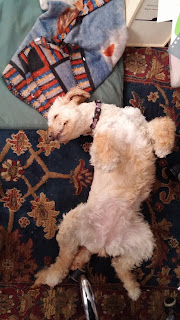 People keep telling me she has grown, I don't know if she has her back is the same length but she has put on nearly 3kg since she got here and the vet assures me she is just right still, so it must have gone somewhere! 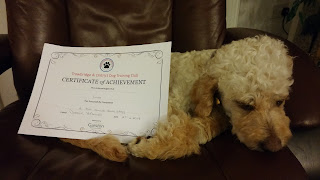 She also got a certificate of achievement for staying for two minutes at dog training, they both love going to that each week. 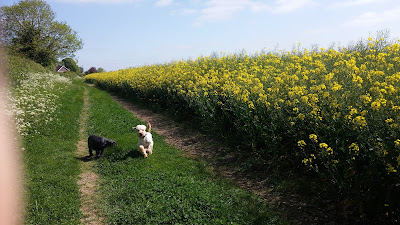 Walking in the fields, she loves to have a run and boy is she fast! She will come back when she runs off after another dog, but I am always on tenterhooks wondering if she will! 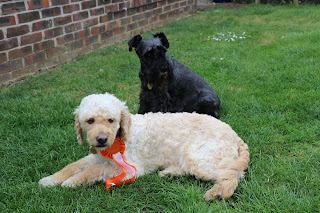 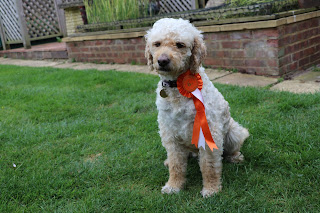 We went to our first ever dog show for both dogs, just a fun one and I had to take them both into the ring. Luna got a rosette for 6th best rescue dog. She was exhausted because we walked there and back again as well.
I could go on, but this post is over long already!