When I first heard of Twiddle Muffs we had been visiting Mother in Law who was in an interim care bed in a dementia home following a stay in hospital. It was a temporary arrangement to rehabilitate her back home, which is where she is now. Some of the residents of the home could probably do with a Twiddle Muff to keep them occupied, and I know there are hospitals putting out calls for them but none locally as far as I know.

Most Twiddle Muff (or Fiddle Muff as my Dad called them) patterns are knitted but I came across this free pattern available from Ravelry. I meant to get round to making one or two, and then I thought of my aunt who has dementia and is still living at home with carers and equipment. So I made her a Twiddle Muff based on the free pattern but I made it with 6 more rows to make it longer, and added fancy edges when I joined the two parts.
The picture above shows the undecorated muff. I added bobbles for interest as suggested in the pattern.

This is the inside, again I added some bobbles but no decoration. 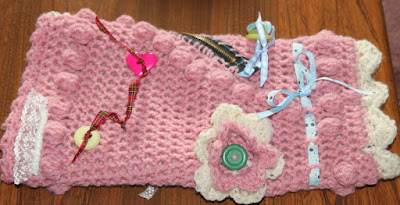 Then you just add whatever will make it interesting, lace, ribbon, zips, buttons, beads - what you have! 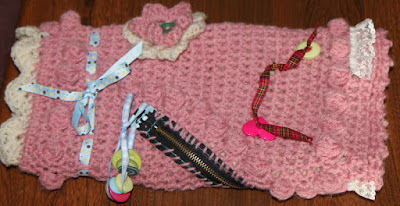 I took it over and gave it to her, and later when my parents sat with her she wouldn't give it to my Dad to look at, so I think it is a hit! She is fascinated with the crochet flower, which someone else did and I thought it was a great idea. She is trying to detach it from what I have been told. No idea if she will use the zip, but if she does I put some ribbon with cats on underneath so it won't catch and she might look at them. 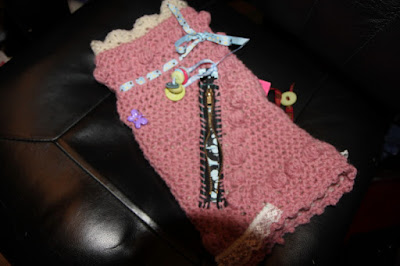 The yarn I used is Marriner Aran acrylic with wool that comes in 400g balls.