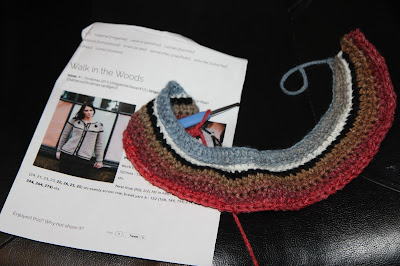 My Cazzytime blog was started when I got into paper crafting, and the paper crafting blog world (which took off like a storm when before it had only been happening on forums) and when I began crocheting again around 4 years ago after a long gap (I crocheted from aged 11 to my mid thirtys - then I started working full time and just didn't have the time). What started me crocheting again? Well I took early retirement from the Civil Service and I became a grandmother.

The Cazzytime blog had got a long crochet bloglist which I can't think is helpful, you have to go right down to the bottom of the blog to find it, and it is growing all the time, so I will put it on here and it will be visible.

I am starting off with one of my most recent projects, I will add the rest of them but I haven't decided how yet, maybe all in one long post, or maybe a separate page with links to the post in Cazzytime.

This jacket is made with James C Brett Lakeland chunky yarn, the pattern is from Inside Crochet Issue 47 which you may still be able to purchase electronically. The sheet you see with the photo is the errata sheet. I have learnt that it is best to check the Inside Crochet web site before starting any pattern, there are lots of errata on many patterns - but they haven't included everything as I found to my cost with a pattern in the same issue!

The jacket is originally worked in plain yarn, and it has fir trees round the yoke which I decided not to do. I had thought of working sheep instead of trees which is why I picked black and ivory for my contrast colours.
When I looked at the details of the trees it was obvious that the increases were part of the trees! The trees were quite complex, there were decreases and increases on the same row and different stitches that made them pop. I didn't like the look of them in the photo and didn't think they would go with my main yarn. So I had to work out the total increases per row then distribute them round the yoke so I increased it and ended up with the correct number of stitches. I did try out a sheep sample but I couldn't get it to be sheep shaped. I thought maybe I can add sheep later... 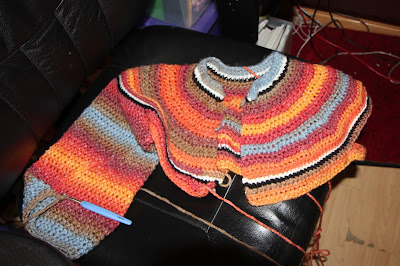 This is the finished yoke, I started on a sleeve to make sure it was going to be big enough for my fat arms and I added six stitches, my arms are out of proportion to my body which makes clothes buying a nightmare and I hope when I lose the rest of my excess weight they will slim down and not end up with great flaps of loose skin - I am dreading that! Anyway I digress - I could see the effect of the yarn was different to the yoke, much more subtle blending of colours, the yarn is quite blocky and the stripes are really defined - can you see the difference? 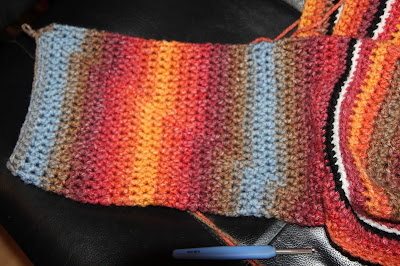 So I could see a travelling seam, I started it at the underarm and it ended up on the top side of the sleeve, which made the next few rows a bit of a challenge because they included decreases and I had to work out where to put them. After asking advice on the Crochet UK and the Chatty Knitters and Crocheters facebook groups where a couple of people said it looks fine (really, I can see it?) and one helpful person said if you turn the sleeve at every row start (it was worked continuously in rounds) the seam will stay put. In all my years of crochet I had never realised that one small tip, and when I was trying to explain the solution to another facebook pal and looking at the pattern to tell her what that said I spotted that one little word "turn" which I had missed in my enthusiasm to complete the sleeve, and even if I spotted it (or maybe I did spot it) I would have ignored it not realising the significance.
I began the second sleeve, turning at each new row and, guess what, the sleeve seam stayed put where it should be! So first sleeve was "frogged" (this is a fairly new term to me and means unpicked, or unravelled again - rip it, rip it - ribbit, ribbit - that is what a frog says). I started the sleeve again later. 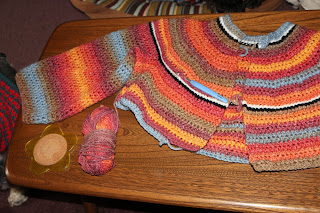 This photo shows that when I continued with the body, which was worked all in one piece, I was getting the same distinct strip effect as the yoke. I had expected that with the sleeve sections now taken out and the resulting shorter rows that made up the body that this wouldn't happen. So I had to decide if the sleeves would look silly against the body if I carried on and thought they would. So I frogged the body then split it into back and two fronts, of course that meant I would have side seams but the overall effect is much better and the stripes on the yoke don't look out of place.
I made the body a little longer than the pattern, and the sleeves had to be longer because I have long arms. 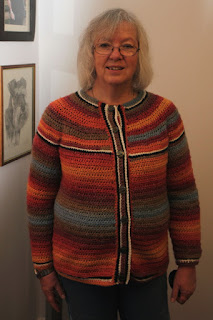 This is me (badly needing a haircut) wearing the finished jacket, after a battle with the buttons I chose. I spent ages choosing buttons, it was between some art deco looking black and white ones with squares and lines on them, or these marbled green ones that pick out the green in the yarn. When I tried to sew them on the yarn would not go through the buttons, I found out that the red in some King Cole Riot DK that was the exact colour of the red on the button band, even then the needle I was using wouldn't go through and I had to change it down for a narrower needle with a big eye. 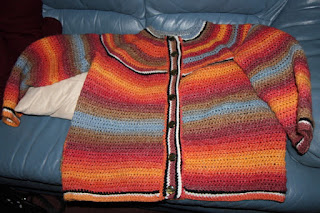 I haven't made any sheep to appliqué onto the yoke, and maybe it looks better without, what do you think? Another option was to make white Irish roses, but that might look silly.
I have worn the jacket twice and got a few compliments, I am very pleased with it, maybe I will make another one.

I have managed to add links to all of my old crochet posts below this post, had to fiddle the date on this post to make it appear after the rest.
Posted by Cazzy at 00:30