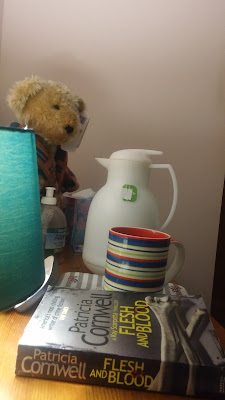 Is it Tuesday???? I thought it was Monday all afternoon, got confused! I am sorry I haven't been round and commented, I really meant to, and the reason I am showing you the photo above is that it is T on Tuesday time at Elizabeth and Bleubeard's place!
This is the view from my bed, I make a flask jug of chamomile and peppermint tea to take up with me, bought the jug for Hubby for when he came home but he never did. The book is one my Mum gave me and I haven't read yet because I am reading 25 novels of John Buchan, which I got for 99p and the first was The 39 Steps, really old and I remember the black and white film vaguely, and not politically correct these days but I am enjoying the stories.

We went to dog training class last Thursday and Luna did quite well for her first time, we are in the intermediate or teenagers group lol. We have homework we are practising each day but Luna seems to be getting bored of it. She sits, stays but gets up before I tell her, that wasn't the homework, it was to walk to heel weaving round a row of chairs - I can put two out in the room I have! Poor Sooty is still not happy getting near her in case she hurts him. He waits upstairs until she is safely down before he comes down, and he doesn't ask to go out in the night 2 or 3 times any longer, he is crossing his legs! He should be able to last the night out now, unlike me!
Luna changed her mad 5 minutes from dashing round the house or garden to dashing at Sooty to try and play but she is so rough. Sooty was seriously threatening her which didn't stop her and I found puncture wounds on her head later. Not sure if Sooty also got bitten, it is hard to see under his hair.
Now when she starts he comes to the door to be let in. If he squeaks in pain as he has a couple of times she stops and looks very concerned about him.

I've googled advice on jealous dogs (she is jealous of Sooty and tries to push in if anyone makes any fuss of him and not her, even snapping at him sometimes), and advice on calming her down when we get visitors, and advice on dealing with her fear of men. I have advice coming out of my ears!
She is getting on really well with my youngest son now, but it took a lot of visits and fuss, and she still can startle and growl if he moves suddenly, gets up or moves his arm. 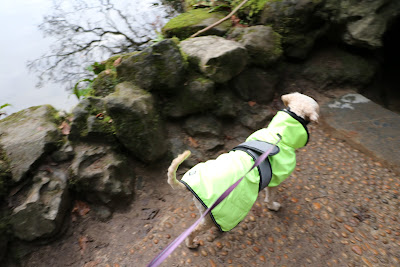 On Saturday I decided to drive to Stourhead and take the dogs for a walk round the lakes. This is only possible during the day from December to end of Feb, so I better make the most of it. After that it goes to after 4pm only. I'm a National Trust member so I don't have to pay a thing, although it is a long drive to get there it is very worth it.
Luna's third coat arrived, this one is long enough in the back but too wide round the strap so I have sent off for some more velcro to make it fit better, but I like the design of the coat and they wash and tumble dry beautifully. 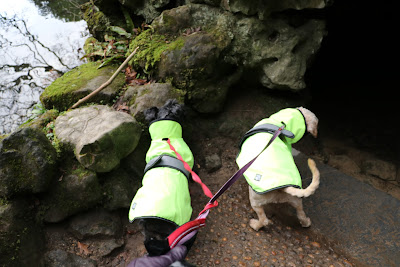 Going into the grotto. 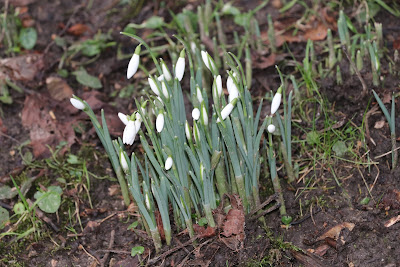 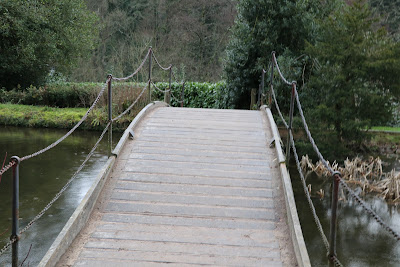 Over the bridge, I think we walked for nearly two hours, I felt really relaxed afterwards. 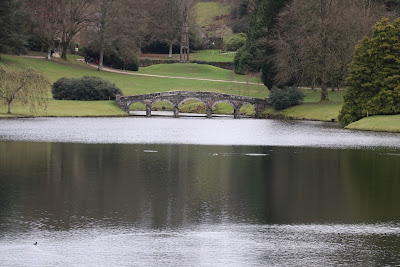 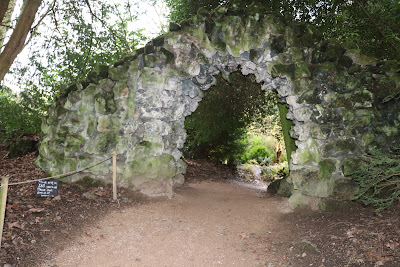 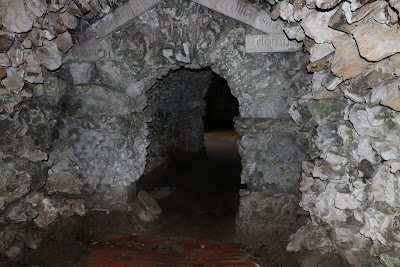 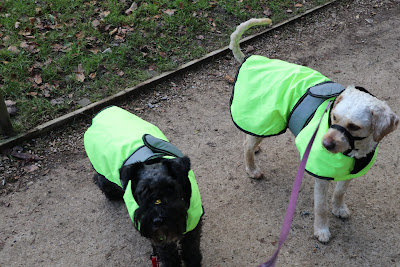 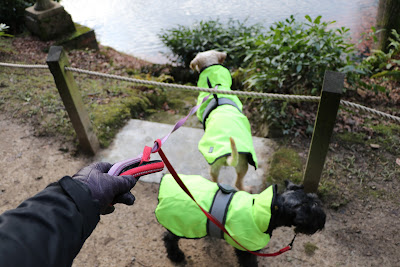 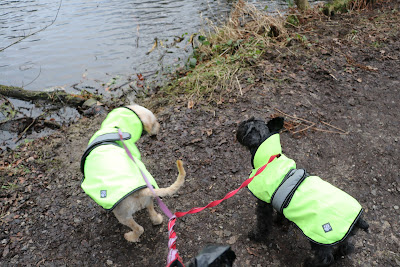 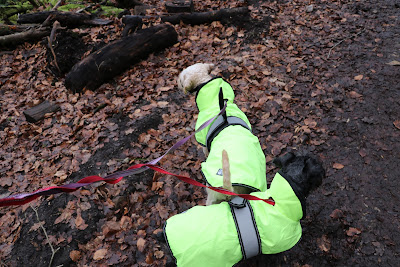 We met lots of people and dogs so the dogs were happy! 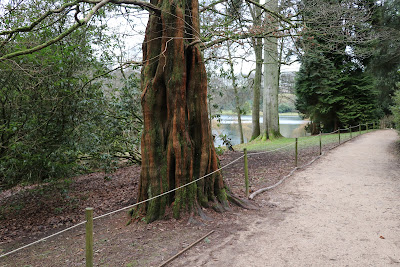 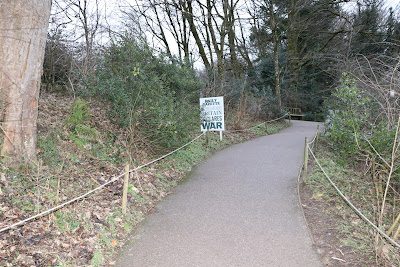 On the way back to the car. I took loads more photos too. 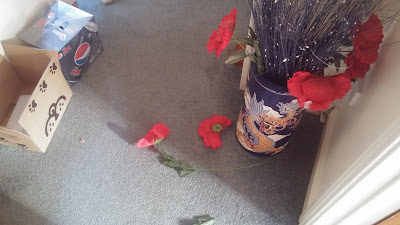 I still need eyes in the back of my head with Luna - she's like a hyperactive toddler into everything, this is some of her work. I have had to take a motorbike model in a box from her, my sandal (twice), my jumper yesterday, if she finds clean washing on the stairs she will play with it or chew it, so I have to put everything away and be tidy now! She stole some chicken from the kitchen counter when I stopped to take a phone call. She broke my favourite Shaun the Sheep - I told her no lots of times but when I was out of the room.... 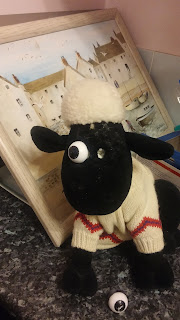 I crocheted this Jennika hat to match my scarf last week. It needs some buttons that I don't yet have to match the scarf. 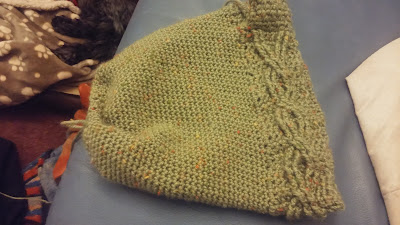 It's made in King Cole Fashion Aran in green with orange flecks. 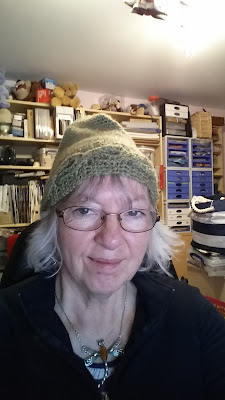 Funny phone of me with the hat on, I wore it Saturday and it felt like it was going to ping off the whole time, so now I have a hat that is too big and this one possibly too small. The band is fine it is the body of the hat that is tighter. 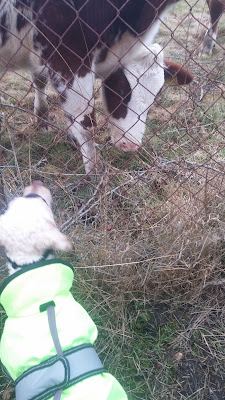 Luna meeting cows, she looks for them each time we walk by the fields now. 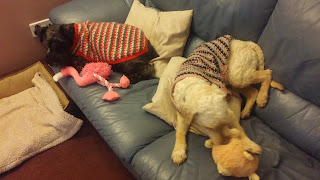 I'm trying to get them to be friends and playmates, Sooty is there under protest. He was happy sitting on the other side of the settee, I made a fuss of him and Luna came to stand on him and push in, so I tried to make a fuss of them both at the same time. Eventually he sneaked away to his bed.crochet