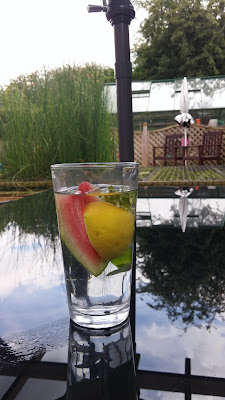 I haven't joined in T on Tuesday for so long, first I wasn't well for a few weeks which seems to be an allergic reaction to something, I've been taking antihistamines since I worked it out and have felt a lot better. I was so drowsy, I just wanted to sleep and had no energy and everything was an effort. I thought it was the heat then it carried on.
It's hot again here though.
My friend posted about a fruit infuser bottle, and I thought why not just put some fruit and mint in a glass? I kept this fruit going for over a week until I noticed this morning it had gone mouldy. How long is the fruit good for really I wonder? Now I've gone and bought an infuser bottle myself, I wasn't going to.
So grab a drink yourself and join in the fun at Elizabeth and Bleubeard's place. There seems to be a party going on. 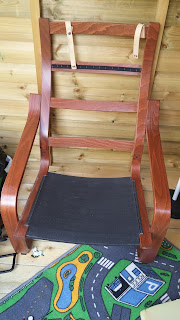 I've been thinking for a while that I needed a comfy chair I could sit and crochet in, and remembering the IKEA Poang chair I used to have that was so comfy, but we didn't have the room for it at the time. I wanted a chair for the summerhouse this time. Well I was driving home from dropping off the great grannies and saw a sign saying free, there were two chairs. I turned around and between me and my son's girlfriend we managed to get one of them in the car. It was dirty so I washed the outer and inner covers and then the foam. Covers shrank a bit but it's fine. Now I am planning a crocheted cover for it as if I don't have enough queued up! 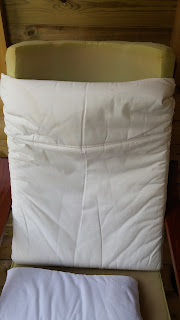 Then my son found an advert for two leather cushioned chairs and a footstool, I had been wishing I had gone back for the second free chair, when I did the next day it was gone. I wanted a footstool too! I was thinking if I ruined the chair by washing it I could go get a new cushion in IKEA quite cheaply, but I had no idea that there were loads of these chairs selling second hand locally.
The leather ones are gorgeous and so comfortable, I really feel like the summerhouse is somewhere I want to sit all day until it gets too hot!
Now I am worried that when the sun gets round to shining on the summerhouse windows in the late afternoon and evening it will fade the lovely leather cushions so now I have ordered some blinds for the windows and doors! This could also make it cooler to sit in, well a little as there is no insulation, but it is feeling less shed like to me now. I'm thinking of getting some solar powered lights, bought some before but they never worked. If the solar bit is outside and the lights inside, I hope I can get it to work this time.
I'm also thinking a little side table or even two would be nice. The dogs love the new chairs too which are being covered to protect them for now. 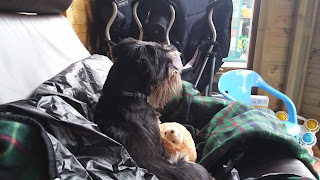 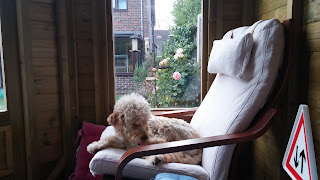 Luna in the free chair, now washed and clean. 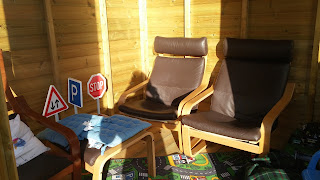 As for the dogs, there is so much to tell. Bertie makes Luna much naughtier than she was before, although she was pretty good - they have both hopped over the fence into next door's garden when they were out in the front part of my garden. This happened twice now, the second time they sneaked past me and I suddenly noticed they were gone! If I shout Bertie - biscuit, he comes back and Luna will follow, luckily they can't get out anywhere else.
This morning I had to rescue a small frog that Bertie was playing with in the kitchen, then I had to lift him up to extract him from Luna's breakfast!
Yesterday I saw him on top of the pond net with Luna watching, later I found a fish tail and part of a fish on the sofa! Don't know if he found a dead fish or caught a live one! 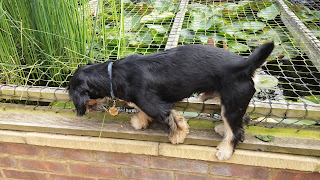 We've gone walking round the fields a few times, the crop of rapeseed looked ready and Luna thought it was wonderful to run inside it and explore, I daren't let Bertie off too or I would have been there all night trying to get them back. Bertie was on the extender and one time I was talking to some people and he went in and got tangled - then I had to go in and untangle him and then I looked like I had been through a hedge! 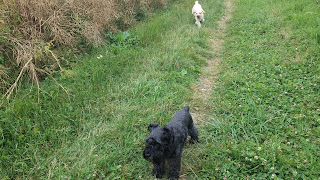 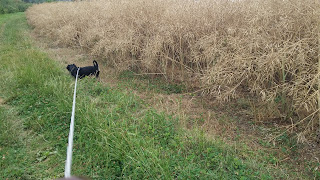 Yesterday  they had harvested the crops, Luna was so surprised to find her playground flattened. So for the first time I let him off the lead round the fields, he and Luna went charging off at great speed.
They did keep coming back, well Bertie did for biscuits and Luna followed. They both went off through a stile into a field where the crop was not harvested and I thought that was it, would lose them for hours but thank goodness Bertie came back for biscuits again closely followed by Luna. Further round the field and Bertie was heading back in the wrong direction towards that stile, so I called him and put him back on the lead. Too much excitement for one day! Sooty always plods along behind.
Poor Sooty had a grass seed in his paw and was biting me when I tried to get it out, Bertie and Luna were both shouting at Sooty to protect me, since then Luna has attacked Sooty twice for no good reason which I really need to stop, Bertie joins in and poor Sooty is scared to go near them or me. 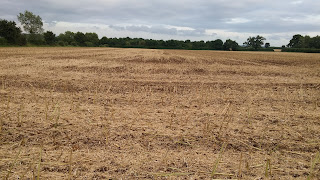 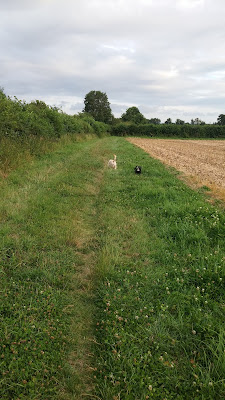 Before all of this we went to a couple of dog shows, well three and Luna picked up some rosettes so did Sooty. The last show we went to Bertie was there too, I take all three into the ring but they are fun dog shows not serious ones. Bertie didn't get a rosette but Luna got first in Best Rescue and then was Best in Show. Sooty got third in Best Veteran, he won third in Best rescue in an earlier show. 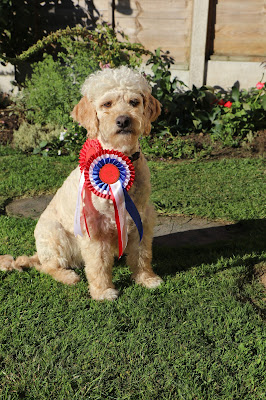 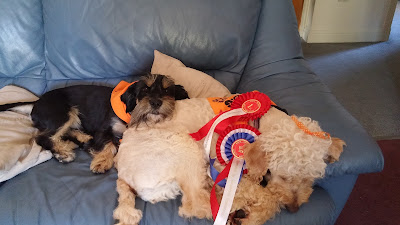 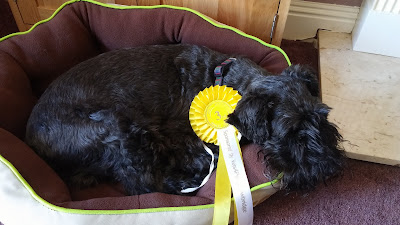 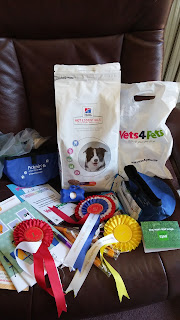 The dogs got prizes and vouchers at this show too! 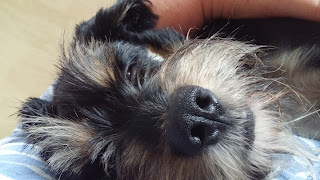 I'm assuming it was Bertie who chewed through the vacuum cleaner cable, as Luna has never chewed cables and Bertie looked very guilty when I asked who did it! 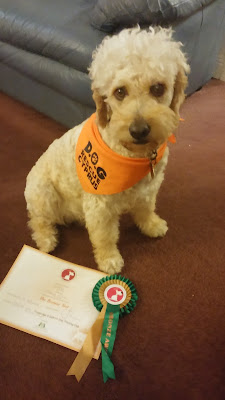 Luna got her bronze award at dog training, so she should be very very good lol! 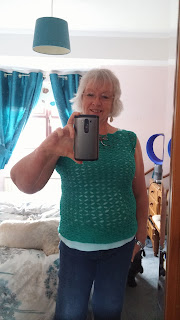 This was the top I told you I wouldn't wear with a light vest underneath... 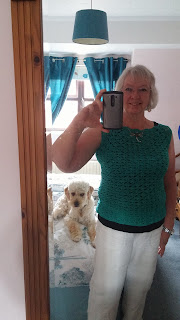 ... same top dark vest underneath, I wore it like this! 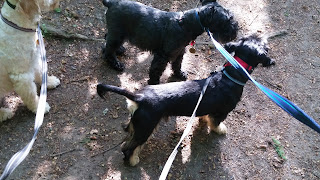 We went on a very long walk, about 3 hours one Sunday afternoon round the Iford Manor estate. 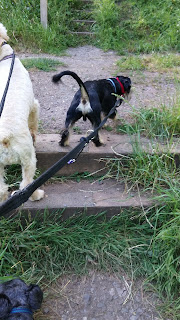 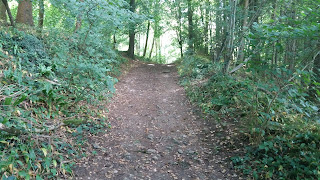 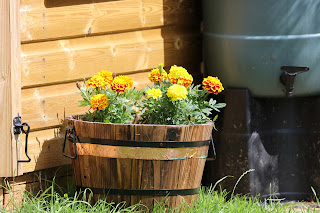 Worked out how to grow marigolds that don't get eaten, tubs and copper tape! 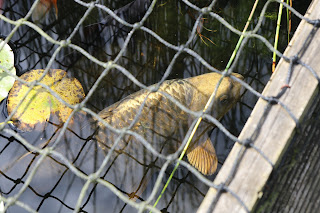 This is the biggest fish in the pond, nothing else comes close yet! Luna is scared of it! 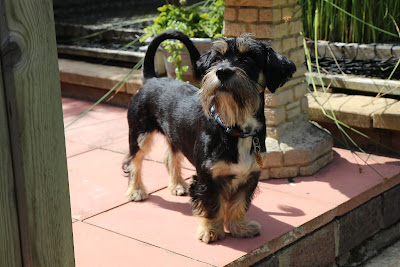 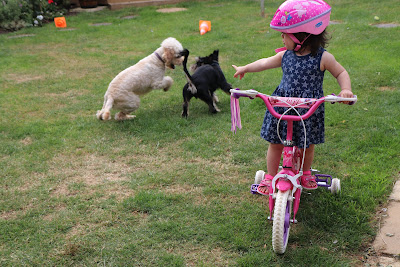 My little granddaugher Lily on the pink bike I bought her secondhand, worrying about the dogs play fighting!

What my washing line often looks like since Bertie got here!