Such a sad post and so hard to write.

This is one of the most difficult posts to write, some of you may have wondered why it has been so long.
The reason was that my husband lost his 3 year battle with cancer in August, and for a few months before that he had got very weak and ill and all of my time and energy was focused on looking after him.

He was just 59 years old and he died from metastatic melanoma, which began with a mole on the back of his arm. Metastatic just means that it spread, and once they decided that treatment wasn't working and stopped it the spread seemed to speed up.
It has been a very sad time and really horrible to watch him turn to skin and bone as he couldn't eat much, and for him to not be able to do any of the things he wanted to do and used to do. 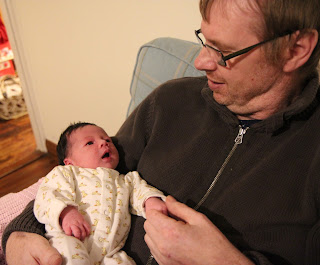 This was Shaun in November 2015 meeting our new baby granddaughter Lily. Back then we had faith and hope that the treatment would work, or there were more treatments if it didn't. In the end nothing worked.

During the past few months I stopped paper crafting and instead crocheted, crochet being more portable and you can sit down and do it anywhere with just a hook and ball of yarn. It is very therapeutic, however even the crochet stopped in the last few weeks before Shaun passed away in a local hospice called Dorothy House where he spent his last 5 weeks, coming home for just one weekend that didn't go very well.

Two weeks before Shaun died Alfie dog went over the rainbow bridge to wait for him, Alfie was 15 years old which is the oldest any of our Miniature Schnauzers have lived to. 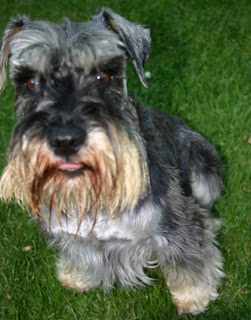 Now Sooty has lost his friend and master, we only have each other apart from family and friends who visit and sometimes stay. So we are learning to live all over again and readjust for our losses.

How do we do that? When I find out I will let you know. I am sleeping a lot more which is probably good, for the past few years I haven't been getting enough sleep. I'm getting up earlier as a result.
We are walking a lot more, again good for us, not so good when I am in pain with sciatica or my back but I am mostly working through the pain and hoping it is doing me good. It certainly was necessary to pound out my anger or grief along the pavements and paths long before we got to Shaun's last day. Cancer is so unfair and doesn't care how old you are.

We had the funeral last week, Sooty came along too and was very good. Everyone said the service was lovely, and the food at the wake too. I had to write a eulogy and the boys helped and it was well received.

It's not quite all over, there is the interment of the ashes to come, and I am still catching up with paperwork.

Sooty is 12 years old now, and beginning to show his age a little.

I can't seem to get enthusiastic about paper crafting yet, but at one stage I had to clear my craft room to get a hospital bed in and other equipment but poor Shaun was not able to come home and use it because there were no carers available during the Summer break. I haven't put everything back yet, I really want to buy one of those Storage4Crafts Petite Salcombe storage unit that I hope will make things more organised and tidy, then I will sort things out to go into it and some things to go to the hospice that cared for Shaun for 5 weeks so they can use it for their crafts. Maybe when I have done that I will be able to start crafting again. I am just waiting for a good discount before I buy one.

I continued to crochet, finished my blanket and then didn't start anything for a few weeks, but I will show you all of that in later posts.