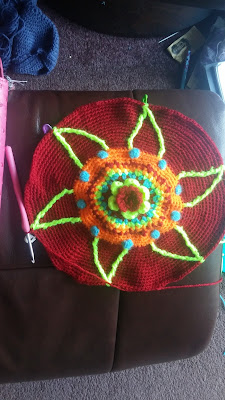 I haven't blogged for ages, and I nearly didn't tonight because I have been in bed trying to sleep off a migraine!

As well as the Dancing in the Sea blanket I have been taking part in a Mystery Craft Along at Melody's Makings. The final reveal told us that we can make our mandalas into either a bag or a pillow (cushion), and I chose to make a bag - the only thing is it would work perfectly in my living room as a cushion! I think I might have to make some more, they are quite addictive.
I began making the bright one in the first photo which is made in Marriners DK, and it seemed to have the same tension as the Rico Creative Cotton Aran used on the purple version, which didn't make sense but now I have completed one mandala it is about 1" (2.5cm) smaller, so not sure if it is big enough for a bag or if I need to add more rounds. 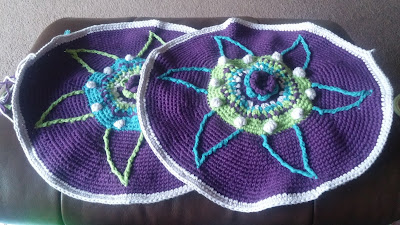 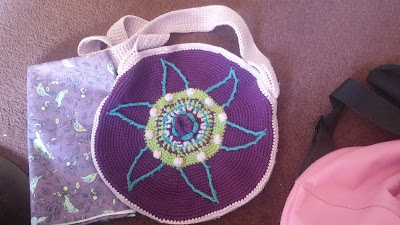 Here is the bag with handle shown with the fabric I purchased to line it. 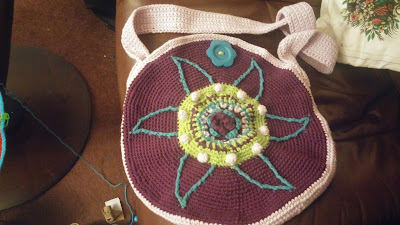 I had the perfect button for the bag, bought at a show last year! Just need the toggle now and to do the lining. I was thinking of trying to do something to the strap to make it be able to be shorter or longer as required, I'm still thinking about that. 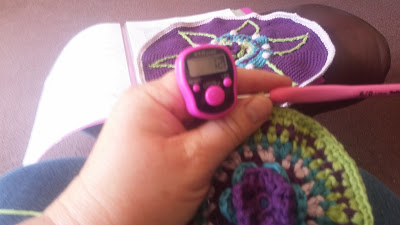 The mandalas were quite complex, stitch markers, stitch counters, writing out the pattern, much frogging, and yet they are still quite addictive!

Here are some more of the Scheepjes CAL Sea blanket squares coming along. 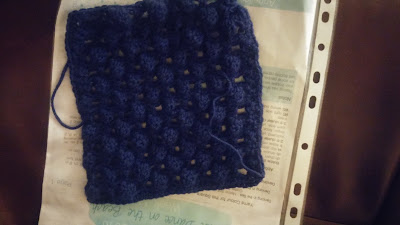 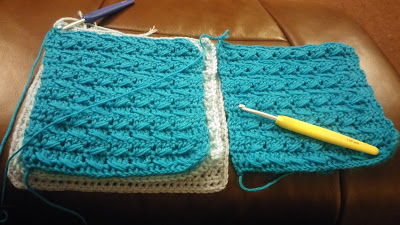 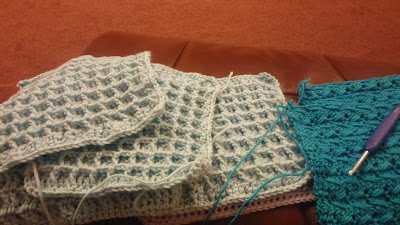 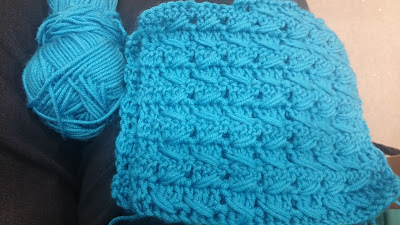 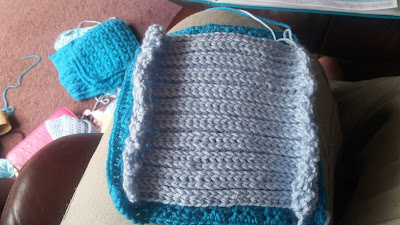 This square has sort of defeated me, 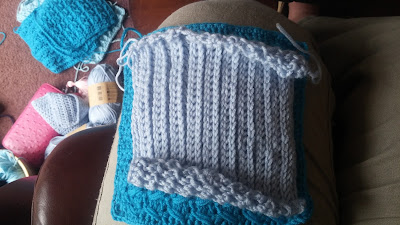 although I got the stitch after watching the video and frogging what I had done which was just slightly different. But the edges were going to be a nightmare to border, but then the whole thing shrank so small! I would have to go up a size or two in hook size to get the size. People say it will stretch out a lot when blocked, but I feel this pattern will naturally try and shrink back again! 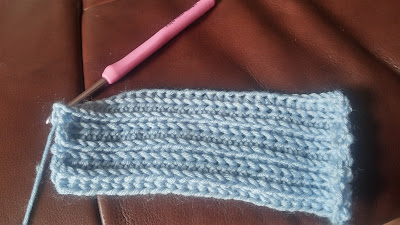 I might substitute it with this version, which is using one of the stitches and just a back loop, it seems to be behaving. If not there are a few alternatives being tossed around the closed group that I might use. The lines have a meaning to the designer of this square, and the stitch was Marinke's favourite apparently so it is a shame that it doesn't work so well in a square. 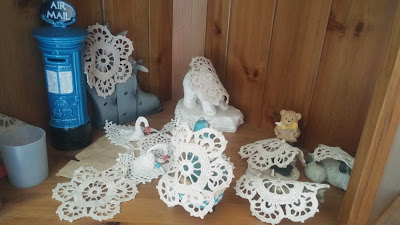 I think Kenny was redecorating with my coasters! I found this a week after he had been visiting! 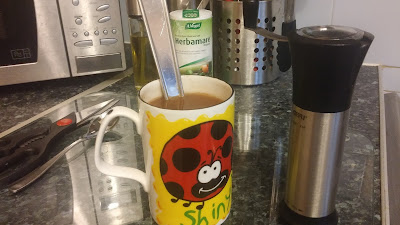 Hot cocao (without milk) and next to it my new nutmeg grater which is very good! I will join in at T for Tuesday at Elizabeth and Bleubeard's place, later than I hoped to, and I didn't get round to comment last time and I apologise for that. 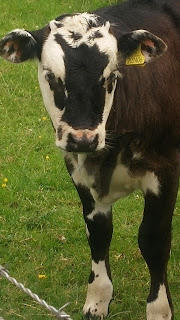 Sooty and I have been walking every evening, I hope he will forgive me for not going tonight, and here is a really pretty calf who wanted to see him - from a distance!
When we walk it is fast and I feel that I am pounding out my anger and sadness as my hubby gets sicker.
The last few weeks have been so tough, we heard that the cancer was worse and had spread to the brain on the same day we heard that hubby was suitable to go for a drug trial in Oxford if he wanted to continue fighting.
Yes he wants to fight, he wants to live! So we were told he would have to have a special radiotherapy, which we now know is called Gamma Knife, to destroy the brain tumour.
Then we went to Oxford, by then hubby had been told he can no longer drive, and our friend's car broke down at the hospital. At least we got there, and came back by taxi that the AA sent (£153 on the clock when we got out so glad we weren't paying).
We were told that the brain tumour had to be dealt with before the drug trial can begin, and hubby can't get any sicker than he is.  We were also told that the MRI scan he had to have might show up extra tumours and if there were too many they wouldn't be treated and that would be the end of the trial too.
Then there was the MRI scan, then a phone call the following week to say there was only one tumour and we had a call from Bristol asking us to go in the next day. We saw the consultant and he agreed to do the procedure last Thursday. It seemed to go very well, and we were on tenterhooks expecting to get the next phone call to go back to Oxford this week, but when it came the appointment is not for two weeks. I don't know if that is to let hubby get over the procedure but two weeks is such a long time for him to wait in his condition. 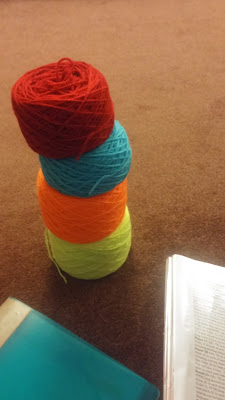 The Marriners I am using for bag two. 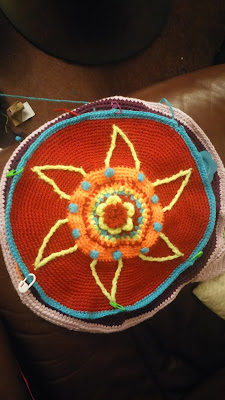 See how much smaller it is, at least 2.5cm 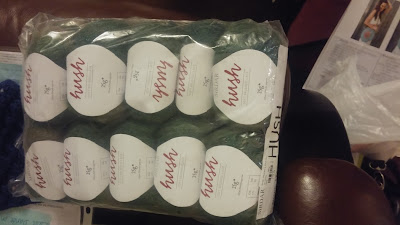 Hush - look what the postie brought me! It's a self striping lace weight yarn, I didn't have any and I keep seeing lovely lace weight patterns! I will add it to the yarn mountain!
Talking of yarn mountain, I decided I should make my super chunky cardigan from Simply Crochet which will be so quick to make and will use up one of the three variations of yarn I bought to make it.
I hope to do this as well as the CALs, and I need to finish my Persian Tiles blanket and get on with Frida's Flowers! 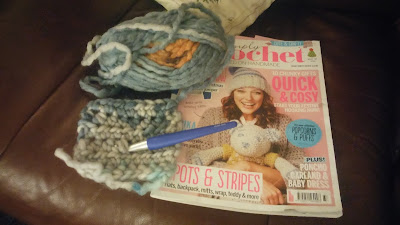 I know - it's Summer right now and has been really hot and sunny this week, but it needs to be done. Besides it is very cool evenings! I have a lovely Summery sweater I want to make too but this should be a lot quicker to make in Super Chunky Sirdar Indie yarn. It has to be Knit Pro hooks, I only have a size 12 and 10mm in Knit Pro.