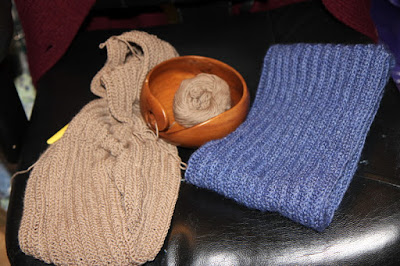 For a week I dropped the Persian Tiles blanket and instead I made birthday scarves (one each) for my brother and father.
Here the denim one made with Stylecraft Life is finished, the tan one made with Rico Essentials 100% Marino wool in Pebble.
The Rico wool was tightly twisted and reminded me more of cotton in use and appearance, when squished the scarf is soft enough, but not sure it looks as good as the denim one. Also I found myself researching different methods of joining yarn, and on the pebble scarf I used the invisible knot, the Russian Join and the Braided Join. I hope the invisible knots will hold, I was led to believe they do then read comments left by people on the other two which said otherwise! The Russian join made the yarn bulky so there was a lump in the scarf, the braided join tutorial said that it wouldn't add bulk and you wouldn't notice it - maybe I haven't quite got it yet, I tried twice and it was just as bulky as the Russian join.
You can also see the Furls yarn bowl in use here. This bowl while very beautiful is quite small, I was a little surprised when I first saw it here. You can only buy it direct from Furls in the US and I guess I carried away, it was on sale when I bought it but it still was slightly over the limit for Customs, so I had import tax and fees to pay and the Post Office fee is a flat rate £8, which is ridiculous when it is many times the actual tax. Made the bowl around £40. It still worked out cheaper than any wooden ones I have found over here! It is only suitable for one colour at a time too.
It works really well with round balls of yarn, or cakes wound on the wool winder. Larger oblong balls of yarn really don't work at all. I have tried finding the yarn in the centre on these and failed many times, I just checked on definitions and I see that Red Heart explains how you can't use the yarn from the centre of a "ball", well I will stop trying! The Americans call what most others seem to call a skein a ball, and a skein is a similar but different arrangement.
I found a good definition of hank, skein, ball and doughnut, even cones here.
I always thought skein and hank were the same thing, and this is backed up in this definition and it seems is a U.K. thing.
When you buy a hank you have to wind it into a ball or cake before using it, the doughnut, ball or skein (oblong ball) can be used as it is. I know a lot of people always rewind their yarn into a cake, it makes it easier to store and easier to use, you can find the beginning of the yarn in the centre easily.
The Rico wool I used would best be described as a doughnut (US donut). The Stylecraft Life is in skeins, or if you are in the US it would be a ball. I have had to wind some of these into cakes recently, and I will explain why when I talk about the new tote I bought recently.
If I buy a huge skein of yarn (maybe it isn't a skein then as the term also seems to refer to a specific quantity according to some definitions) of 200 grams to 400 grams it is better to cake them.
If you use skeins as they are they bounce all over the floor, and there is no good way of stopping that - except for winding into a cake it seems. 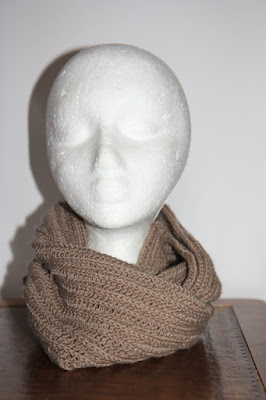 I must give my model a makeover - anyway here the finished wool scarf looped over twice. 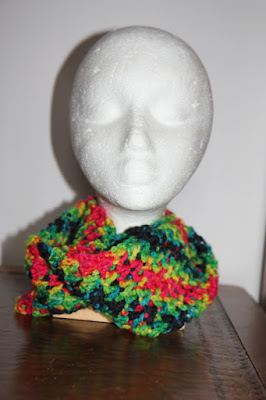 Here is a better photo of the little scarf I made for me in hand dyed yarn from Woolly Wonders, and I am still debating whether to frog it and make it with a different pattern. I like how the colours worked up though. It is shorter but still loops over twice easily which surprised me. 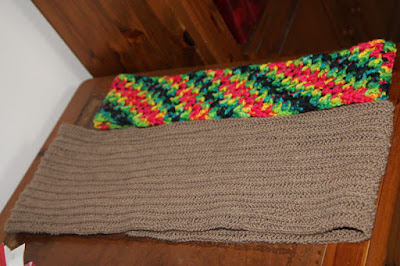 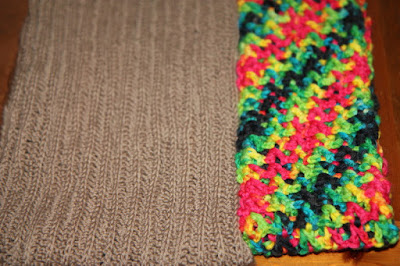 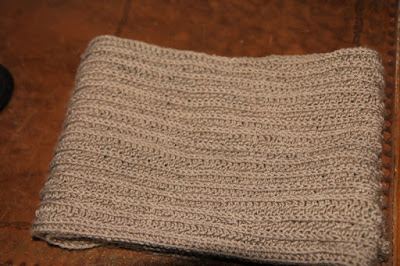 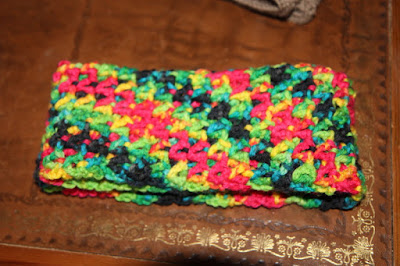 I might just keep it as it is, what do you think?