My BIG news is that our new Granddaughter Lily arrived on Monday, a few days late. So we have two lovely grandchildren now. Not yet got there to have a cuddle! 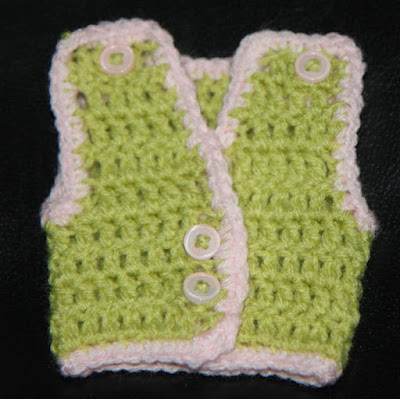 I was really pleased that I was able to not only correct this tiny body warmer pattern (originally posted in the Lincolnshire group on facebook, but clearly written very roughly and not tested) so it actually fits a 1 to 1.5 lb baby, but I also totally reformatted the pattern so that it looks like a professional one, and someone else in the group who made a body warmer from the original pattern which only fitted a Barbie doll, then tried my revised version and succeeded in making one that fits a baby. 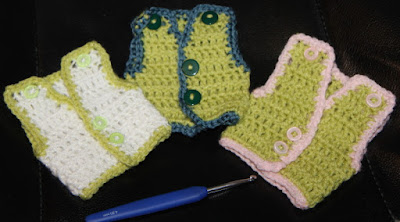 I sent these three off to Grimsby for an order that was going to a a hospital along with much needed buttons, ribbons and thread for the group to use. Some people send their makes in with no buttons and they have to be added before they are sent out. I think that treble (US dc) is too large a stitch for tiny babies, they can get their little fingers caught up in the holes (although this is not as great a problem as it would be if they had sleeves), so I am working on a dc (US sc) version,  and the way I did this was to make one of the above body warmers without edging it, and use it as a template. I took photos of the step by step process for the group so they can follow the pattern and see what they are trying to achieve too.
I could have tried a htr (US hdc)  version and I might still try that to see which is best. The dc version is a little on the firm side, and is coming out smaller, so I need to adjust either the hook or add more stitches.
Then I need to work on larger versions for slightly bigger babies. These body warmers button at the shoulders so that babies who are attached to wires and tubes can be dressed easily, and really with tiny fragile limbs it is better to have this sort of design.
I might end up converting all of the patterns to small stitches, I also thought of trying Tunisian crochet versions, I haven't done Tunisian crochet for many years and I only made a couple of things before, but it can be a lot like knitting in finish so might work well for these garments.

The great news is that I took in the other baby items to the Royal United Hospital in Bath where I had a meeting with Lydia who is a Community Fundraiser on the Forever Friends Hospital appeal team. She told me that I can donate the items directly to the hospital and they will be washed by the hospital before use.
I took the ventilator bonnet, which still had no ribbons or cords, and just as well because anything with ribbon is not accepted for live babies, and after thinking about it I decided that a crocheted chin strap with button would probably work.
She liked the smaller stitches on the new version of the body warmer that I took to show her too.

It actually helped to break up a very tiring and boring day waiting around in the hospital for Shaun's cancer drug to be made and delivered, and then for it to be hooked up and dripped in. We had an early start too so are both really shattered now.

I will pass on the paperwork from the Lincolnshire group to the hospital, because they can maybe fulfil a larger need that I can't possibly do alone.

The other bit of news is that my Aunt loves her twiddle muff still and never stops twiddling! They have to take it away from her to go to bed, she talks to it and plays with it constantly and won't give it up easily!
Posted by Cazzy at 00:28