Time for Tea on Tuesday, and exciting news! 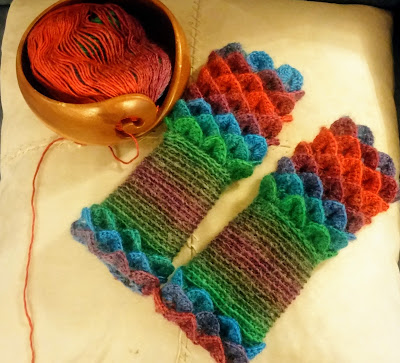 The last project I finished was these fingerless gloves from the Furls Crochet Along. I loved doing them, took three attempts to do the first. It was too tight, then I realised I had made a mistake, then realised I actually madEe two mistakes so I began again. The yarn is King Cole Riot, and the bowl is a Furls bowl. I will probably give these to someone for Christmas. 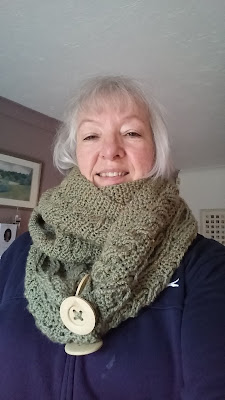 I also finished the mystery CAL which is called Jennika and was by Melody of Melody's makings. It is meant to be an accessory that you can wear multiple ways, sew it up and wear it cross body (I don't think I will wear it like that and mine seems to be too long to do that, it is the correct length so maybe I should have gone a size down), or sewed together as an infinity scarf, or left as it was for a scarf or on the head and round the neck as a cowl. I decided to add borders and buttons so I can wear it either way, infinity or straight scarf and it is lovely and warm, and the exciting bit is there are patterns to come for a hat and mittens to match! 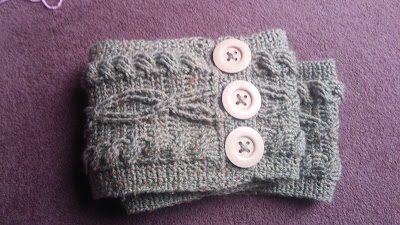 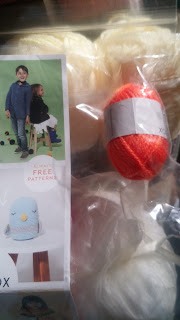 Bought some yarn from Love Crochet and found this cute ball in the pack! 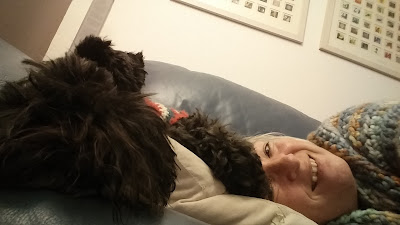 Selfie, Sooty and me! 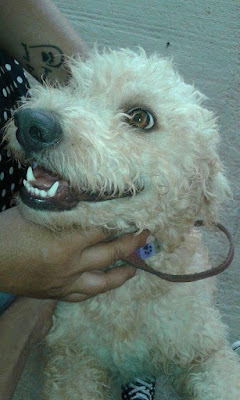 The most exciting thing that is happening in my life right now is this little lady called Luna. She is in Cyprus and I am adopting her, and I just heard I can have her on Dec 31st which works out great as the fuss of Christmas will be over and she can settle in quietly. She is living in kennels now, so there could be some house training to do, but Sooty's new little sister is going to be here soon. I wish it was sooner, but it takes time to do all the work to get her to fly. She has been spayed today. She is just 18 or 19 months old and is a Cyprus poodle. I had a home check and now I have more work to do on the fences to stop her escaping if she tries to. So I have several rolls of wire netting and some posts, just need someone to put it up now.
I'm now getting the full story, she was tied up outside by her previous owner so was rescued into kennels, so I doubt she has any house training at all! 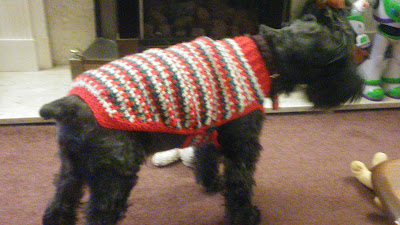 This is Sooty's new jumper, I made it to fit him, not from a pattern but loosely based on a previous pattern and another one I saw a photo of. Looks quite Christmassy I think. I made it in Marriners Aran yarn which has some wool content. 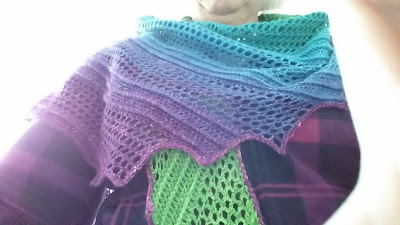 This is the shawl I showed you last time, now it is blocked you can see the pattern and points. I love the colours together. Yarn from Pook GB on Etsy. 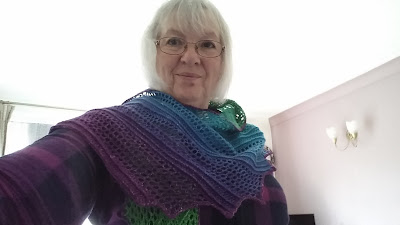 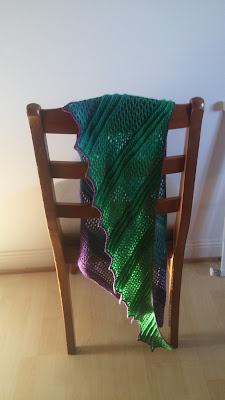 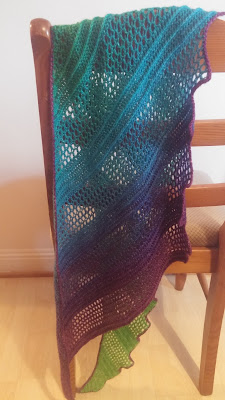 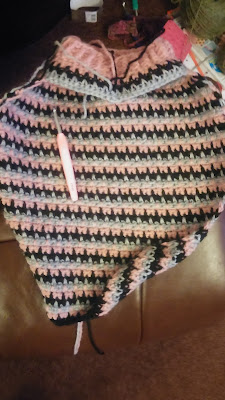 This is another dog jumper in progress and it is for Luna, hope it fits because I think she is the same size as Sooty, if she is bigger I will donate it to the dogs home and start again! 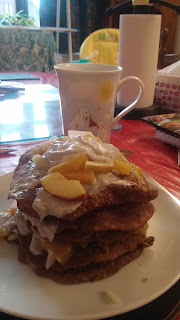 This isn't the same pancake stack as the last post, I just realised I had the same thing again! It is T on Tuesday at Elizabeth and Bleubeard's place, and I owe comments from the two previous ones - I am so sorry, I just haven't managed to do it and I don't know where the time goes!

I made it to the I Made This blog, with my Easter bunnies, quite exciting too!
Posted by Cazzy at 22:25