T for Tuesday and for Two CALs 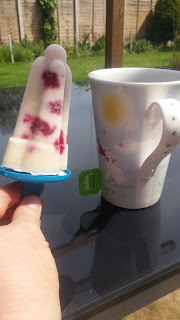 It's time for T on Tuesday, and as long as you show a beverage you can join in with the lovely people over at Elizabeth and Bleubeard's place.
I had some really lovely comments last week, and was so late going round commenting myself, I had to keep my poorly foot elevated to try and get the infection to go away.

It was tricky to take this photo while holding a home made ice lolly, all I did was mix vanilla yogurt with raspberries! 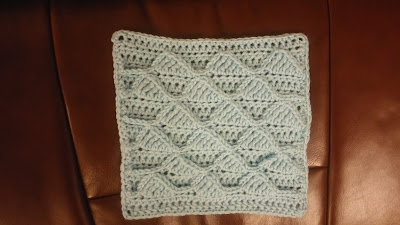 Week four squares are all about waves, square complete and blocked. 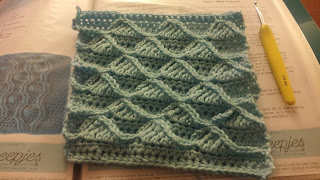 Before the border was added, and before blocking the square was a bit lopsided. 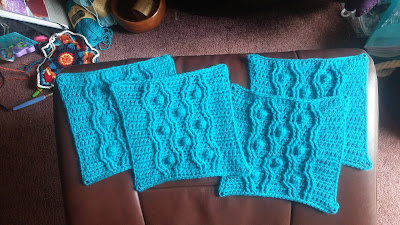 All of week three squares blocked and ready to go in the bag - I just love this colour.

Last week Lisca asked me about the CAL and if it was a course. Well it sort of is I suppose, but let me try and explain.
CAL stands for Crochet Along, and it is an event where a person, magazine or company tells you of a project you are going to make, and the materials you need and the patterns are released a small part at a time at set intervals.
When a yarn company together with a crochet designer launch a CAL it usually means there is a kit or kits you can purchase, as I did for the Last Dance on the Beach CAL, where I purchased the Scheepjes Lux Dance in the Sea kit. The kits for this CAL are in three colour combinations, and in two qualities, Lux has the Merino Soft yarn which is 50% pure Merino wool, and the basic kit is in Colour Crafter which is acrylic.
I have taken part in mystery CALs before, I started to make a toy but didn't finish it, I will one day.

I have never taken part in a CAL like Last Dance on the Beach before, and I am enjoying it. A new pattern for the next square is released each week for a total of sixteen weeks, and you make four of each square.
As well as instructions a video is released for each square too, so beginners should be able to take part as well as more experienced people. All of it is available on the Scheepjes website, and there is a Facebook group you can join where everyone helps each other and shows their photos of finished squares. 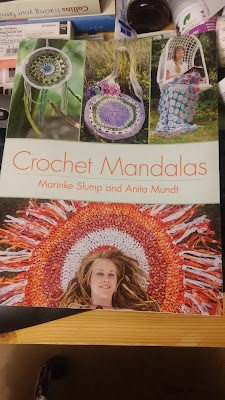 At the end we put our squares together to make a beautiful blanket (hopefully if the squares are all the same size), and crochet a border.

The CAL was the idea of Marinke (Wink) Slump, a lovely girl who lost her battle with depression last year and the design of her blanket has been completed by her friends and fellow designers in her memory. There is a small donation to MIND for each kit sold too. On the Scheepjes site there are patterns for a couple of Wink's past CALs too.

This is Marinke's last book, published posthumously. I felt I should get it, but did I get carried away by people in the Facebook group? It is easy to do, someone comes along and join

There are CALs like the Yarnutopia 365 granny squares project, where one new square is released every day and you can use your stash to make it, and pick and choose which you like, there is a video tutorial for each one not a written pattern. There are plenty of other CALs out there on the internet.

While other people are taking part in more than one CAL........ 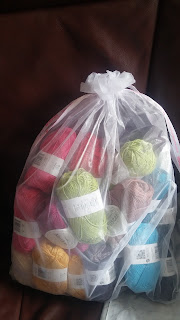 ......oh dear the postie seems to have brought me more yarn from Wool Warehouse, doesn't it look pretty in the lovely net bag! I kept looking at the Frida's Flowers kit and CAL, and I gave in but I didn't buy the kit. I looked for a cheaper cotton and found Drops Muscat which is in 50g balls so is perfect to substitute for the Stylecraft Classique and saved myself £20. I tried doing it in King Cole Giza because I have a pile of that and wouldn't need all the colours (and a few other makes) - but it always worked out more expensive that the kit because I wouldn't need the whole of the 100g ball in many cases.
The Frida's Flowers CAL has a new part released every fortnight, and is not for beginners but for people who want to improve their skills. Part 4 is about to be released, so I have some catching up to do.
The Persian Tiles blanket is not a CAL, but is a spin off of the Jane Crow CAL last year which I think was called Moroccan Tiles. Once the CAL is over the pattern is withdrawn. The pattern for sale is a simplified design compared to the CAL version. I was a bit slow and didn't save the patterns or print them for the original CAL. 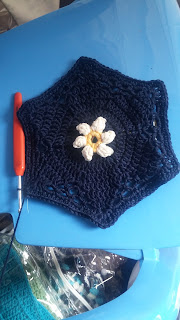 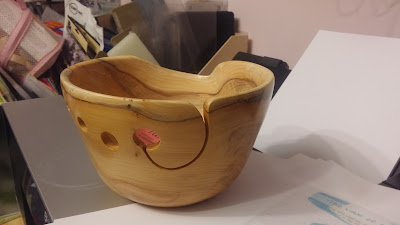 A while ago I posted about my Furls yarn bowl which worked out quite expensive because I got stung for import duties and the dreaded Post Office fee which is several times the tax often.
I wasn't really looking at yarn bowls, but I spotted some on Ebay,  one of two gorgeous bowls available at the time and hand carved from Yew. Isn't it beautiful, and so big! I will take a photo next to the Furls one so you can see the difference. I was really disappointed with the size when it arrived, but not this one.
This is also a work of art, so totally lovely and the price was good too (well it wasn't cheap, my treat to me). The Ebay seller isWright Turn - and the artisan who carved this masterpiece is Jon Wright who is on Facebook. The bowl was so well packed it was quite a fight to get it out and see how beautiful it is. I love all the wood grain, and how it is different on every part. 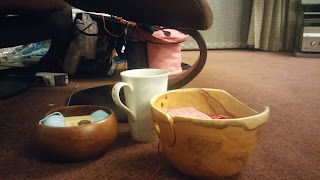 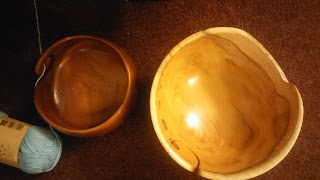 View from above, empty, isn't that pretty! 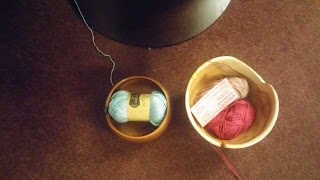 The cotton yarn is 50g, see the Furls bowl is only just big enough for one but I could have got more than the two in the Wright Turn one - or a much bigger ball of yarn! I must take a photo of the bottom of it too, that is carved with the names.

I'm also looking at potential new hooks, my hooks are quite new and are Knit Pro Waves which were highly recommended, but I am wondering if a more shaped handle would benefit me as my poor old hands get stiff and sore after crocheting for a few hours. The set I really like the look of and the one that gets good reviews is the Tulip Etimo which comes in pink in a pink case with pink scissors. Other people recommend Clover Amour, and Addis, and some swear by Furls hand carved hooks. The Furls look gorgeous but postage the same as the cost so doubles the price, then pay taxes and fees as I have only seen them direct from Furls in the US.
Someone posted about some other hooks that are similar to Furls and a whole lot cheaper and now I have found lots of them by different designers at various prices. Some work out a lot cheaper than Furls too. I even found one in the UK who carves the handles and fits them to metal hooks.
Lots of designers seem to get hooks and equipment sent them to try and recommend, I could do that too - if anyone would like to send me stuff to review! 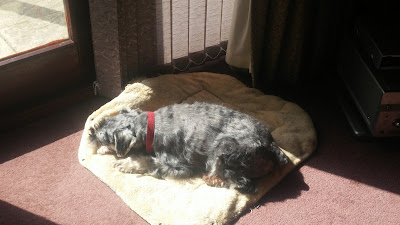