As you can see I missed last week, and haven't posted anything since the last T day!

What a difference in the weather from last week, this morning it snowballed, really! Look - little balls of snow! They were soft when you stood on them. So no sitting in the garden crocheting this week, I've been inside bundled up with the heating on instead! We did have a little sunshine, but it was still very cold outside. 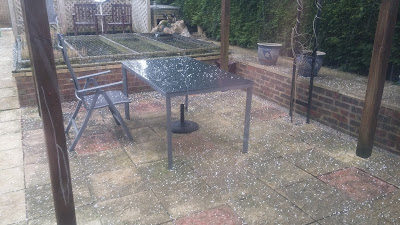 Last night I made a mug of peppermint tea and sat down in my recliner to do a little crochet before bed - then I fell asleep and woke up (to a cold mug of tea) after having a nightmare still in the chair at 2 a.m. Alfie dog also woke, and stood up all distressed trying to work out where he was, after having a nightmare at the same time. I hope it wasn't the same nightmare! What do dogs have nightmares about I wonder?

So here I am again, sitting in the recliner before bed with my crochet and favourite mug of peppermint tea (well I will be in a minute after I post this, and my tea is cooling down to drinkable temperature hopefully and not cold like last night), trying not to fall asleep before bed! If you want to find out more about this weekly event hop over to Elizabeth and Bleubeard's place.

Here are the views from my recliner, complete with bits on the carpet from grandson's recent activities that you can read about at the bottom of this post! 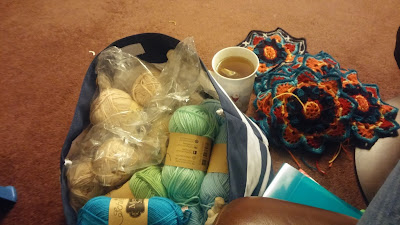 I have got further on my Persian Tiles blanket, the remaining 15 tiles are coming along nicely. I really thought that by last Wednesday I would have completely finished them all ready for joining and end sewing, well that didn't happen! 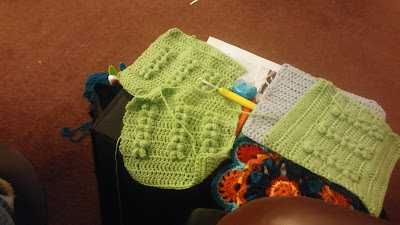 The reason I hoped to finish was the Scheepjes Dance in the Sea CAL started on Wednesday last week when they released the first pattern for the first squares to be made. Tomorrow the second pattern will be released. So I am trying to finish my 4th square tonight. I realised - after someone else also noticed it on their squares - that my border is the wrong side facing, so on the 3rd and 4th squares I did it without turning to get the border the right side. I might have to redo the first two borders now! 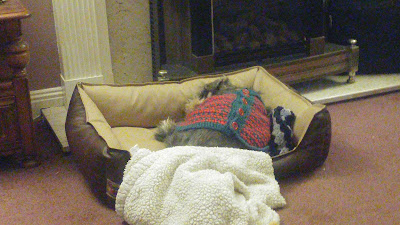 Hopefully Alfie won't have nightmares tonight, here he is settled in and wearing his jumper. 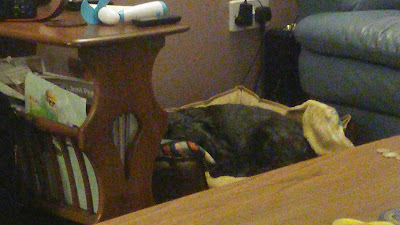 Sooty's in the other bed, at least I hope he is and that he's not pinched my chair as he often does!

I joined the Facebook page for the Last Dance in the Sea CAL, I might have mentioned that last time, and after seeing someone posting a project book filled with prints and yarn samples I remembered I had some similar books and it was really a good idea so.... 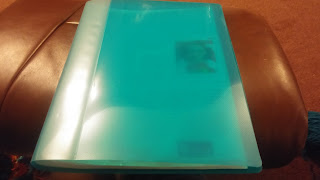 Here it is, I need to print off something to go in the spine bit, probably the top of the page with the CAL name. 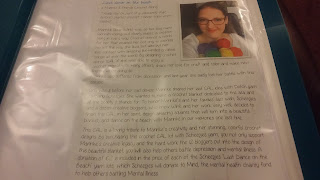 I inserted the info sheet that came with the kit... 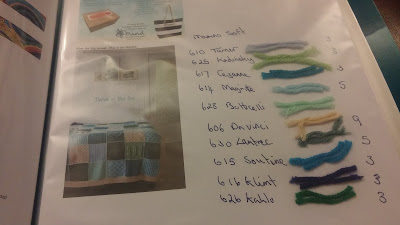 and a couple of pages printed from Marinke Slumps' blog from a post created by her sister, and this one shows the blanket I am making and the yarn samples. This is a good idea to identify the yarns if the last bit has lost the yarn band! I also added the hints and tips sheet with the reference square we created first, then the first pattern. Tomorrow I can add the second. This will keep my patterns nice and clean and neat and I will always know where they are. 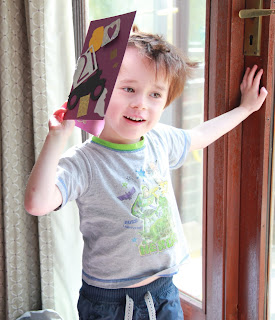 The reason last week was missed was that my hubby was unwell at the weekend and I took him to A&E (emergency room) on Monday morning and they kept him in from Monday to Saturday in isolation treating him for an infection. I found it really strange that we had to put on a disposable yellow plastic apron when we went in to visit him, what does that do? It doesn't cover a lot of your clothes really, and what about handbags, coats if you take them off etc? On leaving the room you had to dispose of the apron and use the hand gel outside - except I am allergic to the hand gel, so they said wash your hands. The only place to wash my hands was in his room. My eldest son and his little family visited at the weekend which made hubby determined to be discharged, and he was finally on Saturday, after being declared "safe" and not likely to infect anyone on Friday ("you don't need to wear the aprons now" - we were sat there with them on), and being converted to oral antibiotics.  He is very weak and has lost weight, and was given the news that the cancer is still growing although it hasn't spread to anywhere else. We are waiting at this time to hear if he is suitable to go on any cancer research trials in Oxford, I so hope that he is. It has given us a little hope for the future, our little grandson feels the same love for my hubby as hubby feels for him, and he said his granddad is his best friend and his favourite. It could be very tough on him to lose his granddad when he is only just coming up to 4 years old in May. This was him posing with a "get well" card he made for his friend who has scarlet fever, Kenny has just recovered from Chickenpox himself. He was in trouble when he added more bits to this card because he used the child friendly scissors to cut a hole in the heel of his sock - while he was still wearing it! Then he kept insisting to his daddy that it was an accident - scissors were confiscated, even plastic ones! He looks so innocent doesn't he! This is a rare photo of him smiling nicely!
Posted by Cazzy at 00:28